Journey to the Heart of Organic Sunflower Oil Production – Part 2

In Part 1, I started this “Journey to the Netherlands series” to describe my adventure visiting the various crushing and refining facilities.  This series is an attempt to enlighten those who have not been able to jet off to Holland to experience for themselves the entire “seed to oil” process.

At the conclusion of Part 1, I had nestled into my quaint hotel room to sleep off the jet lag from the flight and time difference, in eager anticipation to meet the Spack b.v. crew.  Early the next morning, with a hint of sun peeking out from the cloudy, overcast sky, Olaf arrived to pick me up.  The scenic, half hour drive to Nieuwe Tonge, the newest, sprawling home of Spack b.v., was filled with lively conversation as I peppered Olaf with questions.  We arrived to an impressive facility which was set back off the main road.  As we entered a modern, clean office space, we were greeted by the friendly staff.  After being introduced to the entire team, Marcel, Chief Operating Officer, was kind enough to take me on an in-depth tour of the facility.  We started off perusing the enormous production space where the seeds are inspected and stored, in preparation of the crushing process.  I observed enormous piles of sunflower seeds in various corners of the facility, as well as heaps of sunflower cakes, a by-product of the crushed seeds used for animal feed.  We climbed steep, metal steps to machines that extract the oil from the seeds.  As we stepped up to large, square, steel compartments set in three organized rows, Marcel explained to me in great detail about the crushing procedure.   As a first step, the seeds are cleaned.  Foreign material, like stones, glass and metal is removed by passing the seeds over magnets and filtering through sieving. The seeds are then fed into a machine which physically extracts approximately 75% of the oil from the seed.  In this physical extraction, called cold-pressed, expeller method, the seeds are fed into one end of a cylinder within which a power-driven worm conveyor pushes the seeds through a series of four individual crushing chambers, each one more condensed than the last. The pressure exerted in the process squeezes out the oil.  While the process is called cold-pressed, because of the friction of the crusher on the seed, the temperature can rise to 100 degrees Fahrenheit.

As the seeds are going through the crushing process, the resulting oil then drips down through openings in the bottom of the crushing machine into vats that collect the crude oil.  This oil is then filtered and pumped to storage silos, located outside the building.  The crude oil can be sold in this format, for customers that don’t require refined material.  The majority of sunflower oil consumers typically prefer the crude oil to be refined. Marcel explained to me the crushing capabilities at the Nieuwe Tonge plant produced 90 tons of sunflower oil, and 30 tons of organic canola oil per day.

I was impressed with the appearance of the facilities at Spack b.v. which presented to be extremely cleanly and well maintained.  After the thorough tour of the crushing facility, we then headed back inside the main offices where I was asked to don a disposable cap and jumpsuit.  It was time to explore the filling and packing area.  As we entered the vast space, I noticed four filling assembly lines and several staff members to oversee and assist in the automated process.  I was informed Spack b.v. has a robust private label business for European retail customers who want to purchase smaller pack sizes than IBC totes and drums.  The final stage of the tour included a jaunt into the onsite laboratory where comprehensive testing on both the seeds and the oil is performed.  Standard testing includes, but is not limited to peroxide value, free fatty acids, fatty acid composition, pesticides, moisture and color.  This exhibited to me, how detailed Spack b.v. is about ensuring a consistent, high quality end product.

When the tour was complete, I joined the sales staff for an informative afternoon meeting and was then released into the competent hands of Marieke Klijn-van Roon, the effervescent, knowledgeable sales manager, who has been with the Spack family for 6 years.  She was instructed to whisk me off to Rotterdam and give me glimpse of another vibrant area of the Netherlands.  She took me to an impressive restaurant in the sky called Euromast.  This touristy establishment is 100 meters off the ground that one can only access via elevator and offers 360 degree views of beautiful Rotterdam.  The views were worth the ticket price to ride the elevator and the cuisine didn’t disappoint.  Waterways and boats could be seen in and around Rotterdam, acknowledging how accessible the Netherlands are to the export industry.  When lunch was complete, Marieke drove me back to my hotel and promised to pick me up at 8:30 the next morning for our next adventure.

At the designated time, Marieke and I were joined by Robert, an affable, friendly man and the newest member of the business development team at Spack b.v.  We were heading roughly 3 hours north to Harlingen to become acquainted with the other crushing facility owned by Spack b.v.  When we arrived to Perserij Harlingen, we were welcomed by an all male crew who invited us to sit down.  They gave me an opportunity to communicate what I hoped to accomplish and learn.  As we toured the facility, I discovered the Harlingen expeller facility operated extremely efficiently and produced 150 metric tons of oil per day.  They had 10 presses crushing daily and are looking to expand to 15 presses this year.  The process and machinery was very similar to Nieuwe Tonge, and similar to the other facility, can be operated remotely via cell phone so that crushing can occur 24 hours a day, 7 days a week.  Harlingen had 8 silos to store the crude material at 3000 metric tons per silo.  When the silos were filled, the crude oil is trucked to the refining facility to be refined, bleached, deodorized and winterized.

We thanked the guys at Perserij and climbed back in the car to continue on the adventure.  Check in here in the next few weeks for Part 3 of this Journey to the Netherlands series to join my tour of the refining facility.

If you missed Part 1, please click on this link:  https://spack-international.com/journey-to-the-heart-of-organic-sunflower-oil-production-part-1/ 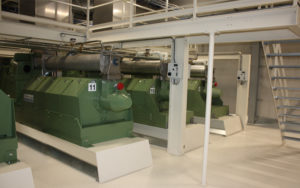 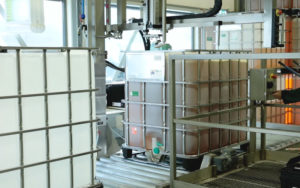 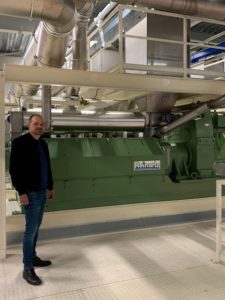 Journey to the Heart of Organic Sunflower Oil Production - Part 2